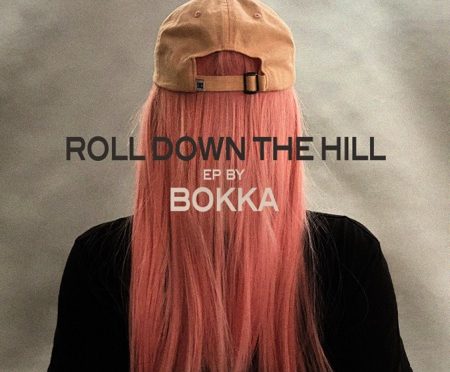 Released back in March, Run Down the Hill is a five track EP from Polish dream pop purveyors Bokka. Made up of five tracks, three of them cover versions, it finds the band at their most playful.

Formed in 2013, Bokka found early success with their first single, Town of Strangers.  Taken from their eponymous debut album it enabled the band to quickly establish themselves on the Polish music scene and garnered attention from further afield.  Right from the start Bokka insisted on keeping the names of the band members secret and let the music speak for itself. , It is a decision that makes their live performances all the more more intriguing as the group take to the stage in disguise. Bokka have since recorded two further albums, both well worth seeking out.

The opening track here  is a cover of Nancy Sinatra’s version of 1966 song Bang Bang.  It’s a wonderfully atmospheric take on one of the poppiest murder ballads ever released.

Next up is a cover of Joy Division’s all-time classic Love will Tear us Apart. When approaching a cover version it can be all too easy to compare it to the definitive original version and ask ‘Why?’  It’s much more fun though to go in with an open mind and say ‘’Why not?   The band have performed the song several times live and once you listen to their take on the song it’s easy to understand why their fans were clamouring for them to release a studio version.

The final two tracks are rearrangements of the band’s own songs. Too Far Too Close is taken from 2015 release Don’t Kiss and Tell whilst 2018’s Life on Planet B was the original home for Take my Hand. Both songs have been given a harder edge to the point where it is tempting to say that the band have effectively given us cover versions of their own songs.

If you aren’t familiar with Bokka then Roll down the Hill serves as a useful introduction and will hopefully have you giving their albums a whirl. This is the sound of a band having  great fun messing around with some songs they obviously have a great deal of affection for and certainly worthy of adding to your collection.

Roll Down the Hill is available on all the usual platforms, find out more by clicking here.

You can find out more by connecting with Bokka on Facebook.