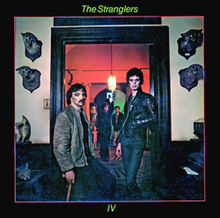 On the 22nd of June 1977 a gig played at the City Halls was to result in the nascent Glasgow punk scene nearly being choked at birth. It seems somehow apt that the band involved was The Stranglers.

Whilst the music press of the time was dominated by the punk explosion outside of London it really was a case of business as usual with long hair, flared jeans and Prog Rock remaining the norm. There were pockets of punks across Glasgow, most visible on Saturday afternoons outside record shops such as Graffiti on Queen Street which stocked numerous punk singles as well as legendary fanzine Sniffin’ Glue. However the scene was crying out for something to really kickstart it in the West of Scotland.

The Sex Pistols Anarchy tour had been due to hit the Glasgow Apollo in 1976, an event which no doubt would have seen the punk flame start to burn much brighter. The gig never took place.  Following the bands infamous live television interview with Bill Grundy which had caused outrage across the entire UK the cancelled banners appeared across the posters outside the famous old venue. The reasons were never made entirely clear although the assumption at the time was that pressure was brought to bear on the Apollo’s owners by the local council, forcing them to follow the lead of other theatres across the country.

Some bands from down south had already played in venues such as the Queen Margaret Union. The Damned had appeared at the Apollo as support to Marc Bolan in March ’77 and Television had headlined there supported by Blondie in May. However the local Councillors, in particular Bill Aitken, the Tory head of licensing, were continuing to make noises about allowing punk gigs to take place in the city at all. It was therefore a surprise when the rather staid City Halls in Candleriggs was chosen as the location for a summer gig by The Stranglers with the Council announcing that they would be attending on the night to monitor events.

The Stranglers were never your typical punk band and some purists would argue that they weren’t actually punk at all. Their debut album had been released in April of that year. ‘Rattus Norvegicus’ was diferent from other punk albums of that period. The keyboard heavy second side was more reminiscent of the Doors than The Stooges but there were plenty of sharp punchy songs present to counter any argument that they were anything less than the real deal.

A large crowd gathered outside the City halls that night waiting for the doors to open. Johnny Rotten of the Sex Pistols had been the victim of a knife attack in Islington that same week and the incident was shared amongst the crowd along with warnings to be careful, an awareness that identifying as a punk at that time could still make you a target for derision and worse.

The support act was a band called London boasting future Culture Club member Jon Moss on drums. They played at an incredible tempo even when compared to other punk bands. Their frenetic set cranking the atmosphere up several notches. After London departed there was to be a long wait before the Stranglers appeared but when they did the effect on the crowd was electrifying. As the opening chords of ‘(Get a) Grip (On Yourself)’ rang out most the crowd rushed forward to pogo in front of the stage.

After several songs bassist and singer JJ Burnel decided to acknowledge the presence of the watching council delegation by belligerently announcing that if they didn’t like it ‘they could just fuck off.’ What followed was unfairly described the next day as a riot which made it seem a lot more malevolent than it actually was. As the next song kicked in scores of fans took to the stage causing three quarters of the band to exit, drummer Jet Black continuing to bang away at his kit, seemingly oblivious to the mayhem around him. There were some ugly confrontations with the stewards as they tried to restore some sort of order but they did manage to exert enough control to clear the stage allowing the band to resume their set. They didn’t get much further before the fans took to the stage again, the whole group continuing to play the final song ‘Go Buddy Go’ as the punters jumped up and down beside them.

The legend is that the nights events were to result in the Council banning punk rock from the whole city. In reality here was never an official ban. However many pubs in the City felt unable to host punk nights due to the threat to their licence if there was any trouble. A few pubs such as The Burns Howff in the city centre and The Dounecastle out at Shawlands were happy to take the risk though. Any restrictions or unofficial ban that there was only lasted a few months with the Clash playing later that year at the Apollo.

The Stranglers also returned to Glasgow to play the Apollo, the councillors making an appearance in the balcony to keep an eye on things leading to Hugh Cornwell having a spotlight turned on them before the band played one of the songs from their debut album, ‘Ugly’. It was a suitably comical conclusion to what was really a rather ridiculous attempt to ban a specific  genre of music.