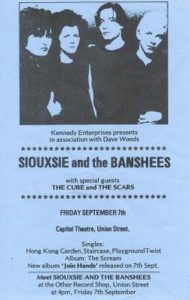 It’s almost inevitable that bands will eventually split up. However it would be hard to top the break-up of Siouxsie and the Banshees for sheer drama as it played out over a crazy day in Aberdeen.

The 7th of September 1979 would have been a momentous day for the band anyway. Their second album, Join Hands, was released that day to positive reviews. The day was to down in the bands history as memorable for rather less positive reasons though. The group, singer Siouxsie Sioux, bassist Steve Severin, guitarist John Mckay and drummer Kenny Morris had embarked on a tour to promote the album. There had already been a simmering tension between Siuoxsie and Severin on one side and Mckay and Morris on the other. It was to all boil over during a somewhat bad tempered record signing session in The Other Record shop on Aberdeen’s Union Street. (This was back in the days when record shops were a familiar sight on the High Street.)

Polydor had only sent a paltry amount of albums to the shop resulting in the bands management selling the shop owner a couple of hundred promo copies  to satisfy demand. Much to the shop owners dismay Mckay and Morris decided to hand out copies for free. Mckay also removed their own album from the shops turntable and replaced it with the Slits album. This lead to verbal and physical exchanges between the various band members and ended with Mckay and Morris storming out of the shop.

With a gig to be played at The Capitol you would expect that peace talks back at the bands hotel would have calmed things down. After all, as the saying goes, the show must go on. It didn’t turn out that way. The rebel pairs backstage passes were found wrapped round their pillows, their room unoccupied.

Apparently they had jumped in a cab and asked to be taken out of town. That turned out to be a few miles down the coast to Stonehaven where they hopped on to a train south, their Banshee careers abandoned in the Granite City.

Opening that night was Edinburgh band The Scars. They were followed onstage by The Cure who were asked to play a longer than usual set as the promoters tried to locate the long gone insurgents. As The Cure left the stage it was obvious that the Banshees could not perform.  An announcement was made over the public address system offering the crowd their money back.. The story could have ended there but Siouxsie Sioux stepped out of the back stage shadows to address the crowd. Her anger was clear as she embarked on a ferocious attack on her  former band mates.

“Two original members of the band are here tonight. Two art college students fucked off out of it. All I can say is we will be back here with some friends who have got some roots. If you’ve got one per cent of the aggression we feel towards them if you ever see them you have my blessings to beat the shit out of them.”

It must have been an electric moment for the crowd. There was more to come. The Cure returned to the stage to play a few more songs before announcing that they had a couple of special guests coming on. To tremendous cheers Siouxsie Sioux and Steve Severin reappeared with Siouxsie again taking to the mic  to condemn the deserters.

“I hope you realise these guys know nothing about the ‘Lord’s Prayer.’ It’ll probably be all the better for that. John and Kenny were doing it for the money and you can’t do a good ‘Lord’s Prayer’ with that attitude. We will be back!”

And that’s how the night ended,  with a rendition of the closing track from their new album. There are lots of things I love about this story. I love that rather than being the end of the band it acted as a catalyst to greater things. Ex Slits drummer Budgie was soon recruited with Robert Smith helping out on guitar on tour dates. The record shop rebellion sounds almost comical now, particularly McKay’s ditching of the Banshees own album for The Slits. It’s hard not to smile at the thought of two musicians jumping in to an Aberdeen taxi and asking to be taken out of town. And I love that despite participating in a part of musical history and witnessing a one off Cure/Banshees supergroup performance the canny Aberdonians still queued up at the end for a refund.