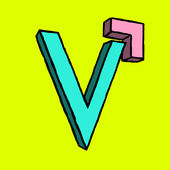 It’s been nearly a month now since Vukovi released their self-titled debut album. If you want your rock albums to leave you breathless and gasping for more then Vukovi do not disappoint. There is no gentle introduction, opening track ‘La DI Da’ grabs you by the scruff of the neck and takes you on a ride you won’t want to get off in a hurry. Everything that you would expect to find in a superior pop rock album is here. Crunching guitars, killer riffs, intelligent lyrics, some subtle synth sounds to add a wee bit of spice and topping it all off an idiosyncratic lead singer who quite simply demands your attention. Janine Shilstone is, in turns, belligerent, gentle, aggressive, subtle, occasionally scary and never less than captivating.

The songs are of a consistently high standard with ‘Weirdo’, ‘Prey’, ‘Bouncy Castle’ and the aforementioned ‘La Di Da’ being particular highlights. There is some seriously heavy rock here and it is lifted well above the norm by the bands well-honed pop sensibilities. The blend of infectious melodies and surprising twists and turns delivered with energetic bravura provides something that is never less than good fun. When the world seems dull and grey the best anti-dote is often a dose of quirky rock music in glorious technicolour and that’s just what Vukovi have given us.  Treat yourself by adding it to your collection.

Buy a real life hold in your hand copy of the album here.

Or if  filling your lugs is more than enough buy here.