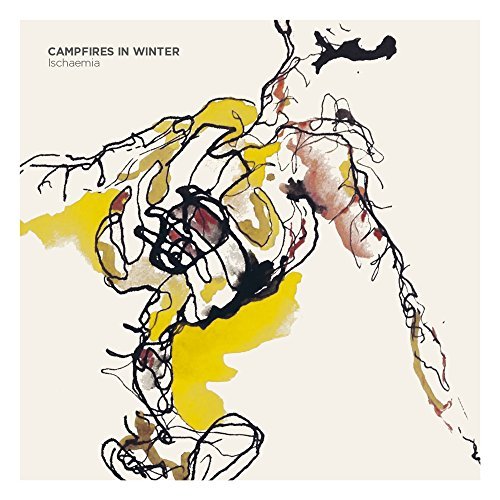 Released at the end of February, Ischaemia is the first full album from Campfires in Winter. The four piece band, originally from Croy, have been working hard for a few years now to get to this point so it’s good to be able to say their endeavours have been worthwhile. The nine tracks here are hewn from the same rich aural seam that bands such as The Twilight Sad have already worked so well.  Campfires in Winter have however added enough lustre to ensure they present themselves with a distinctive, fresh and interesting sound

Opening track Kopfkino sets the tone for what is to come, some muscular guitar work driving things along nicely.  It’s followed by Free Me from the Howl, a contender for the best song on here. The tale of woe is delivered by lead vocalist Robert Canavan in an accent so Scottish it makes The Proclaimers sound like they’re from the Home Counties. The album’s pace is just about right with enough twists and turns along the way to make the entire listening experience a rewarding one. With a Ragged Diamond, one of the best singalong numbers here, picks things up at just the right time before the atmospheric Silent and Still and Each Thing in Its Last Place brings things to a neat conclusion.

Ischaemia is an intelligent, well-crafted album and definitely worth checking out.  At the very least it should have you scouring the listings pages so that you can hear these songs played live.

And below,  the rather wonderful video for Free me From the Howl.