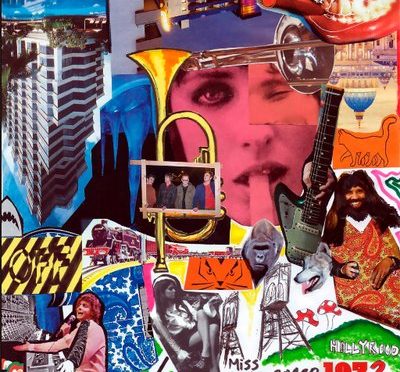 I have to admit that the release of Frantic Chant’s latest album The Glass Factory at the end of February totally passed me by. The good news is catching up with it over the past few days has been a wholly gratifying experience. There’s a lot to catch up with. Weighing in at a hefty 21 tracks and over 70 minutes long it certainly demands a wee bit of commitment from the listener. Here’s the thing though, once you get hooked in to Frantic Chant’s world via the atmospheric opening track ‘A Descending Journey’ don’t be surprised to find yourself holding on tight for the entire trip.

The Leith based band describe themselves as a psychedelicious rock’n’roll band. The emphasis is firmly on the psychedelic with the degree of acid tinged weirdness veering between slightly trippy and full on Kentucky fried brain. Things never get too dark though with humour prevalent throughout. If there is an award up for grabs for the most bat shit crazy track title of the year then you may as well hand it now to ‘Mushroom Jim and the Planet of the Funky Apes.’

There is much to love here. On such a long album there is an ever present danger of imminent boredom but it is adroitly averted by frequent injections of inventiveness taking things on an unexpected diversion. Frantic Chant tread an admirably singular path which will probably unfairly preclude them from world domination. It’s a shame, I’d love to know just what type of world they’d rule over.

You can buy The Glass Factory here.

Indulge in some tweetery with Frantic Chant here.

Or you could take a trip in to their Facebook kingdom.

Watch the YouTube video for Swing to the Left from the album below.