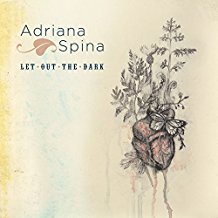 The new album by Adriana Spina, Let Out the Dark, was launched just last week. Released on her own Ragged Road label it’s a strong set full of folk tinged Americana served up with style and verve.

Things kick off  with one of the strongest songs on the album, Home. The thoughtful lyrics are sung beautifully with voice and instruments blending perfectly to deliver a very satisfying start to proceedings.

The second track, Hear it From You, is the first of several tracks which see the band rock things up, providing a contrast to the more introspective moments. Various themes are tackled here, both familiar and unexpected. See Another Day is an emotionally raw social commentary on the current refugee crisis whilst Don’t Recognise Me is a delightful cry of love for childhood. There’s even a wonderfully plaintive Christmas song, Sparkle. An alternative take on the festive season, it’s a song that can easily be listened to all year round.

Let Out the Dark is a grown up lyrically honest collection of songs with Adriana Spina’s voice never less than captivating throughout. It’s been six years between the release of her debut album and this one. There’s plenty here to have you hoping that number three is not so far away.

You can check out the video for See Another Day below.