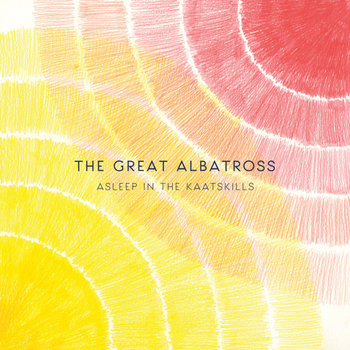 Great Albatross are the collaborative vehicle set up by leader A. Wesley Chung to deliver his own brand of indie tinged folk music. With Chung at the centre of a revolving cast of supporting musicians it’s an approach that promises to keep things constantly refreshed. Their debut album, Asleep in the Kaatskills, has just been released on Glasgow based LP records and it does not disappoint.

Opening track ‘Messenger’ has a dreamlike quality. Short and sweet, it is swiftly followed by ‘The Honeymoon’s Over.’ Driven along by acoustic guitar the track smoothly changes up a gear as things become just that wee bit livelier. The is a country element present throughout but no more so than on ‘Now There’s You’, another up-tempo offering.

The sense of confusion that can sometimes overwhelm an individual as they contemplate love, family and friendship permeates the entire album. ‘Summers Gone’ describes perfectly those feelings of isolation and weariness that can strike us all. ‘Table for Five’ is a beautiful take on vulnerability and self-doubt, the vocal hovering perfectly over the instrumental accompaniment.

Whilst the lyrics are often melancholy Chung never lets the mood become maudlin. As he sings ‘We’re small but our voice is loud’ near the end of the album’s title track he shares an uplifting moment of defiance with his listeners. ‘Asleep in the Kaatskills’ is a wonderfully constructed album that deserves to be listened to in it’s entirety. Atmospheric and emotional yet also joyous at times, it’s a musical journey you will want to take again and again and again

For more info on Great Albatross visit them on Facebook.

You can buy Asleep in the Kaatskills here.